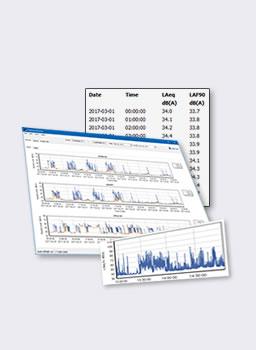 The Reporter software, along with the LiveNoise Supervisor, is included with all LiveNoise noise monitors. There are no annual fees or installation restrictions.

Most noise and alarm reports can be generated over daily, weekly and monthly periods, or custom dates can be selected.

The types of reports include charts and tables of:

All reports can be printed, exported to HTML or copied into a spreadsheet or word processor program.

The following screen shots show typical reports from the LiveNoise Reporter software. These reports are from a system with multiple noise monitors, showing two or three on screen at a time.

The Reporter software can run on the same computer as the Supervisor software, or it can be on another computer on your network, as long as it has access to the correct data folder.

These reports can also be exported in HTML format, so you can send it to somebody else for viewing in a web browser.

As the software is very efficient, it will run adequately on an entry level Windows PC. For systems with a large number of noise monitors a higher power computer will provide faster plotting of graphical reports.

The software does not need a dedicated computer, it will happily run on an existing machine that is running other software.

This software does not communicate with the noise monitors directly, so it does not need access to them. All noise monitor communication is handled by the Supervisor software.

If Reporter is on a different computer on the network then it will need access to the Supervisor computer's Program Data/NoiseMeters directory, which is where all the downloaded measurements are saved.